Zombies on the streets of Toronto 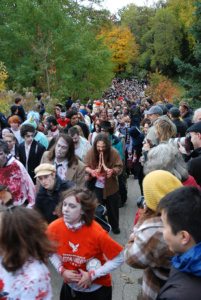 This past weekend after visiting a photography client of mine in the west end of Toronto, I headed down to my downtown office space.  While en route I found that some of the downtown roadways were blocked. This is nothing new in Toronto, there are always festivals and events that have some streets blocked off or closed for cultural events or charity fund raisers like the Toronto Marathon. What was unusual about this traffic obstruction was that it was a parade of the un dead. Yes, zombies had taken over the streets of Toronto.

After watching the parade of zombies, I continued on my way to my shared office space. It is not often that I see the other people who share the office with me, as my schedule and theirs are often very different. But when I do see them in the early morning hours at the office, they like me look like zombies at 8 am in the morning. Unlike zombies who feed on brains, we find our way to the kitchen to find fresh brewed coffee that transforms us from zombies to humans that are ready to get down to work. The complimentary coffee is not just good it is amazing. I personally love the Hazelnut Vanilla flavored coffee.