Women Entrepreneurs and the Challenges They Face 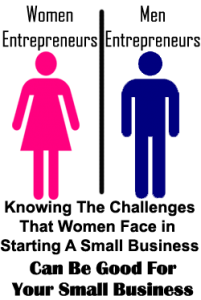 For the past several years, women entrepreneurs have become the fastest growing segment of the small business community. Although creating businesses at this fast pace, there are some significant roadblocks that women business owners have to face that are different than their male counterparts. Women still face the same challenges as their male counterparts, but sometimes they face challenges that men do not have to overcome. When it comes to catching up with their male counterparts, women have made great strides in the business world over the past 30 years. But today’s women entrepreneurs still experience a few major obstacles.

Within today’s business world, women’s opinions and advice are still not always viewed as “expert” compared to that of a man. This gender bias is huge hurdle that many long-time women business owners still face – even when they have out-performed men in the same industry. It is not just other business people or those in the same industry that do not give them credit as experts. Often, when a female starts a business, there are family, friends and others in the business community who may view her small business venture as a hobby or a side project, rather than a bona-fide business. The first hurdle in overcoming this bias, is for her to realize that this is a true gender-bias obstacle and she must struggle past it.

In order to understand the women business owner bias, we need to understand how different decision-making processes favour or disadvantage women entrepreneurs, and what we can do to change those perceptions. This starts with studying which factors prevent investors from investing in these women­-led ventures.

Females are often taught to “be nice” and to be “people pleasers” – which can lead to them seeking the approval of others over accomplishing their own goals. One of the potential problems that can occur is that women may have a harder time saying “no.” This can lead to under-charging for their products/services or being too giving of their time and help in general. Unfortunately, this can typically come at the expense of their own personal or business needs.

In general, women can be less prone to taking risks and can let their own fears (such as the fear of failure and the fear of success) stand in the way of going for their dream and pursuing the path of entrepreneurship. It is said that confidence is a great way to combat these fears – and the best way to feel confident in what they are doing is to make sure that they are as prepared as possible before starting their small business venture. They also need to believe in what they are bringing to the table and value their time, efforts and capabilities.

In their personal lives, women have a tendency to try to be everything to everyone and wear so many different hats for various roles that keeping up the juggling act often becomes more difficult. When women add “entrepreneur” and “business owner” titles into their mix, things may tend to get even more complicated. Women can sometimes have a tougher time delegating responsibilities to others, because they have to “do it for themselves.” The negative effect of this is that it may cause them to spend more time working in their business, rather than on building their small business. This can be  major hurdle to overcome if they want to have a successful business.

One obstacle that many women entrepreneurs and small business owners have overcome is to seek office space in serviced offices in an office business centre environment. They are able to work on their business and not worry about taking care of the office and hiring support staff that they need to manage. When they have secretarial or other tasks that need to be done, they simply hire them out – and do not feel the need to micromanage every task.

Being able to speak about your accomplishments honestly and with pride is a necessity for any successful small business owner or entrepreneur. Unfortunately, some women feel uncomfortable talking about their achievements and may feel like they are being too boastful. This attitude is sometimes tied to the way we have been taught. Boys are nurtured to be competitors and girls are nurtured to get along. Don’t let those early influences stop you. As a woman entrepreneurs, your achievements and accomplishments are some of the biggest selling points your business has to offer. So don’t be afraid to put them out there!

Not every start-up founder looks for investors to help his or her business get off the ground. But those who do know, realize how difficult the pitching process can be. Finding investment and raising capital can be even more difficult for women-owned firms. This means that a women seeking investments or trying to raise capital, often have to work harder and longer to fund their small business ventures.

Yes, women do face greater obstacles than men when starting and growing businesses. While it may not be intentional, the vast percentage of men who help fund people are more likely to fund those who look and sound just like them. What the do not realize is that the consequences of overlooking a woman’s venture can be just as harmful as if there was malicious forethought in the decision. Women entrepreneurs should seek small business advice and help from a variety of sources, including co-founders, professional advisers – such as accountants and lawyers, as well as peer advisory groups, mastermind groups, boards of advisers, and even family members.

The low percentage of female start-ups in the tech sector reflects the low numbers of women working in this area in general. With increased numbers of women employed in technical positions (as well as in other male-dominated sectors such as construction, transportation and other trades), the number of female start-ups in these sectors and industries should also increase. The fact is that many women tend to start businesses in the sectors where they have work experience, skills and networks already established. Until the numbers of women in male-dominated roles increases, the number of female entrepreneurs in these sectors will remain low.

It is not a secret that working women face the expectation to do well in all areas of their multi-faceted lives. In general, men are judged by how well they do in their careers or social climbing activities, while women are judged by how well they excel with family, friends and finally, perhaps, their career. To compensate and protect themselves, women entrepreneurs and small business owners often feel as though they need to adopt a stereo typically “male” attitude toward business. They feel that they need to be more competitive, aggressive and sometimes even overly harsh. Taking on this stereo typically “male” attitude, can unfortunately cause women entrepreneurs more harm than good in the long run.