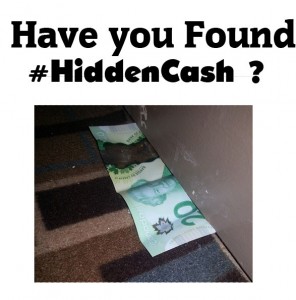 If you have not already heard about this latest Internet phenomenon #HiddenCash, lets us fill you in. On Friday, one of our office space Toronto tenants told our receptionist about this guy in California that is giving away money in a unique way. He or people who work for him are hiding money and tweeting clues revealing how people can find his #HiddenCash. This social media campaign is being done anonymously.

This anonymous philanthropist started a twitter campaign telling followers about places they could find “Hidden Cash.” His Twitter followers began a scavenger hunt for cash that he has hidden in various cities throughout California.

The person or entity that is @hiddencash that is behind this #HiddenCash project, is hiding money in various places and sending out tweets with clues about the location of the hidden money – and quickly found his followers sharing the clues on social media. The amounts and denomination of the funds are not disclosed in the tweets, but that does not deter prospective treasure hunters from traveling hundreds of miles to see what has been hidden.

What makes this treasure hunt fun and interesting to those who read the #HiddenCash tweets is not greed. Most of the searchers who are not looking for the cash claim it is not a search for a profit, but for the thrill of claiming they solved a mystery. News reports of a guy finding $40 and dancing around because he found it before anyone else have surfaced, but people finding $200 have been seen crying (happyily crying).

The anonymous philanthropist who started the #HiddenCash project has stated that the total amount of cash he is hiding could be in the hundreds of thousands. His reason for doing this project is to give back and create hope for people. There is no official tally of how much has been found so far – and there is no estimate of what will be found.

Why should one not want the#HiddenCash philanthropist exposed? Because many of the people who are finding the cash are doing it for the challenge of the hunt and then paying the cash forward to other causes. Some of the people who were interviewed after finding the cash mentioned the charities they planned to donate the funds to. This is probably one of the greatest “pay it forward” campaigns that included pay it forward cash that participants did not originally  have. Carma is awesome!

We are learning that this HiddenCash campaign is no longer a California phenomenon and many copycats have started their own #hashtags using the HiddenCash words for their cities. #HiddenCashTO is one that our blog writer has stated to follow and will be donating any HiddenCash he finds to the Hospital For Sick Children.