U.S. Thanksgiving Without the Macy’s Parade? 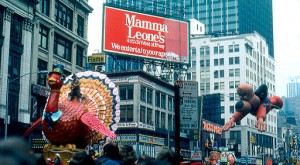 While Telsec Toronto Office Space is Open on U.S. Thanksgiving, one of our office space tenants who works for an American company that has its Toronto office with us, was talking in the 18th floor kitchen about his trip to New York City for Thanksgiving. Like he did every year, he had planned to take an early flight from Billy Bishop Island Airport (only a five-minute taxi ride from our office space Toronto) to New York City on Thursday. But due to weather conditions, that may not be possible. He instead planned to take a train from Union station (a five-minute walk from our downtown Toronto offices). But one thing is for sure – he says that he could not imagine a U.S. Thanksgiving without the Macy’s Parade.

The same winter storm that is affecting the three major airports around New York, is also the reason that has started internet rumours that it may cause the cancellation of the Macy’s Thanksgiving Parade. It is not the parade that is in possible jeopardy, it is the balloon floats. According to USA Today, the Parade balloons cannot take off if the wind speeds exceed more than 23 mph, with “gusts” of no more than 34 mph.

Macy’s parade spokesperson Holly Thomas told USA today the they are closely monitoring the weather as they do each year. She went on to say “On Thanksgiving morning, Macy’s works closely with the NYPD, who, based on real-time weather data and the official regulations, determines if the balloons will fly and at what heights.”

With predicted gusts that could reach up to 40 mph, the large balloons could be grounded. It is expected, but there is no word that the parade filled with clowns, marching bands, cheerleaders, dancers and of coarse floats, will continue as normal without the giant inflatable characters.

The famous New York City parade has become a long-standing Thanksgiving Day tradition for the past 87 years. It has only been cancelled completely a few times and prematurely ended with tragedies a few other times. Here are a some examples:

As for our office space for rent tenant who makes the annual pilgrimage back to New York City, he was determined to see the parade (with or without the balloons) with his family for the 37th time (his first time was when he was 3). He was not able to get a reservation for the train to New York city, so instead he will be taking the overnight bus. Good thing for him the bus has free WiFi, so he can get some work done while he is stuck on the bus for 11 hours. Maybe he will read our blog on Small Business Meeting Tips and enter to win a new Android Tablet that he can use on long bus or train rides.

You too can enter our draw by just following us on Google Plus, https://googgle.com/+TelsecNet