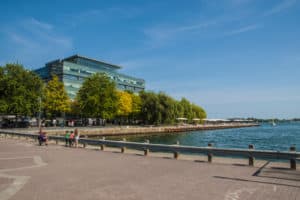 If you haven’t been down to the Harbourfront area of Toronto in a while, you’ll be quite surprised at all of the changes that are happening from Yonge Street to Parliament Street along Queen’s Quay. While new buildings like Corus Quay (home of Corus Entertainment’s Radio, TV and educational content creations) and George Brown College have been completed for several years at their Sugar Beach location, more buildings are going up on the same property. Several new condos have also been completed and people have moved into the area west of the Redpath Sugar complex. And, more are being built. There are also plenty of other mixed-use buildings under construction along the north side of Queen’s Quay.

With all the development that’s underway and more development planned for an area that was traditionally shipping docks, warehouses and light manufacturing, this growing area has truly come into its own as a place for people to live and work. Even the long-time parking lot that was owned by the LCBO at Queen’s Quay and Cooper Street was sold off and is now being developed. Once this development is completed, the LCBO store and the giant Special Orders warehouse will also be demolished and re-developed.

Property developer Pinnacle Developments has purchased the lands around One Yonge Street and plans to build new condo towers around the iconic Toronto Star building. Their plan proposes to have 3885 condo suites in the new towers, along with many offices in the existing Toronto Star building – making this location a truly live-and-work complex.

As readers of this blog know, Telsec is located on the 18th floor of the Toronto Star building and absolutely intends to be a part of this new and thriving community. Telsec’s Toronto office space at One Yonge Street will now be even more of a prestigious place to work and have as a business address. Telsec also recently signed a new multi-year lease with the building owners, with options for more long-term leases in the future. Smart business owners who want to have their Toronto office at this upscale address know that the best part of having an office at Telsec is that they don’t have to sign a long-term lease, and are not locked-in if their business outgrows the space Telsec can offer them.