The view from my Toronto office space 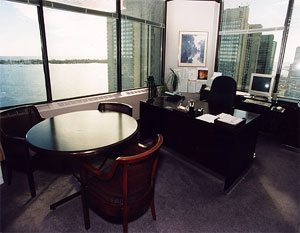 I was in my downtown Toronto office space over looking Harbourfront and the Toronto Islands on Sunday afternoon.  I had to pick a file and wait for a call on my cell phone in order to arrange the drop off of the file.  While I was waiting for the call, I decided to look out the window and enjoy the view.

For a while, I was watching the island ferries crossing the harbour and how the other boats stay clear of them.  Then I say something that baffled me, someone in a kayak cut off a ferry boat. Not even the sailboats or power boats tried this. The ferry had to go into reverse in order to give the person in the kayak a chance to pass.

As I continued to look out the window of my office space in Toronto, I became amused with how the parking lot across the road was filling up, and how bad some people are at parking. I watched one car try four times to get into one of the parallel parking spots, until finally the passenger got out and walked around to take over the parking from the driver. As the the parking lot continued to get fuller, they started to double park the cars.

Meanwhile I glanced over at the ferry docks and noticed that they were loading people on the Trillium (the grand ferry that is normally reserved for special occasions) with people wanting to get over to Centre Island. They really had to be overwhelmed with island goers to have to use The Trillium.

The trillium celebrated her 100th birthday this year. Author Mike Filey (Toronto’s unofficial historian) has published with Dundurn Press of Toronto, a centennial edition of his book “Trillium and Toronto Island“. The book includes the history of The Trillium along with some beautiful colour and black & white photos taken over the years. The book also tells of her retirement in 1956, only to be saved from the scrap yard in 1973. The Trillium made her second debut in 1976 as a fully operational steam ferry.