The Tale of Two Companies with Toronto Office Space

It was the best of times, it was the worst of times, it was the age of wisdom and information, today is not the age of foolishness, it is the epoch of what we belief to be the future, it is the epoch of business incredulity, it is the season of Light,  the season of Darkness has just passed, this is the spring of hope for businesses, the winter of despair is behind us, we have everything before us… ok you get the idea, but that is where the comparison and parody of Charles Dickens’ book ends and we begin The Tale of Two Companies with Toronto Office Space. 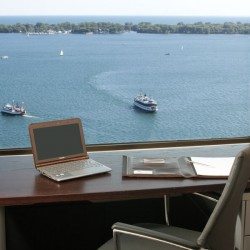 In this Tale of Two Companies with Toronto Office Space, we shall call the first company Forte and the second company Unanimous. Fans of Donald Trump’s Celebrity Apprentice will recognize those names as the team names for this season. Those names are not being used to draw any comparisons, but to pay tribute to a great show.

In our example both these two similar businesses are of the same size and revenues. Forte has a traditional downtown Toronto office space in a high-rise office tower. They have a multi-year lease that they are obligated to payout, even if they need to move to a large office space or a smaller office space Toronto. Unanimous chose to go with a flexible office space downtown Toronto at an office business centre, where they are not tied to a long-term lease and can upsize or downsize at will.

As part of Forte’s traditional office space Toronto for lease, they have a boardroom and a small kitchen space that is not always being used, but they still have to pay for that space as part of their lease. Unanimous has only office space for rent, but they have access to eight Toronto boardrooms and two kitchens that are free for them to use.

Let us now compare these two similar businesses of the same size and revenues, but two different levels of administrative expenses for the same amount of Toronto office space. Forte requires a full-time receptionist and full-time office admin staff, Unanimous has a professional receptionist included in their rent. Unanimous does not need full-time administrative staff, as they have access to secretarial and other services on an on-demand basis.

If you had to make the choice, which office space Toronto decision maker would you fire?