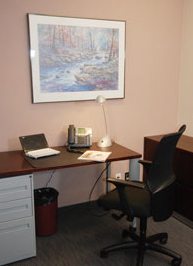 While the official Take Our Kids to Work day is normally the first Wednesday of November every year, that is not always the case around our Toronto office space. Often, many of our office tenants who run small businesses as a one-person operation (or with one or two staff members) will bring their kids into the office after school hours, on teacher’s professional development days, on weekends or other days during school vacation – to help with small clerical jobs or to work on their homework while their parent gets work done. This is not a problem for us or most other office-space tenants, so long as the kids know that it is a professional office and do not wander the halls or disturb other tenants.

Recently, one of our office space Toronto tenants brought his 10-year-old son to work with him one Saturday afternoon for the first time. Like most 10 year olds, he was full of questions. Most of them were about what kind of work his father did and how he did his work. For the most part, his father was able to explain the type work he did and how he managed to do his work so that his son was able to understand.

It was not until his son asked him questions about his Toronto private office that he started to run out of answers. Questions like: Did everyone who has an office there work for him? Why did his office not have a window and the one across the hall did? Where was the lady who answered the phone?

So he explained to his son that he, like all the other people that worked in this business centre, all worked for themselves or other businesses. He went on to explain that every office is different and that he decided to save some money by not having a window office. Then he explained that the lady who answers the phone was called a receptionist and she only works weekdays during business hours. He also explained that, as a tenant, he could come in on weekends and after regular business hours and choose to answer his own phone if he wanted. To that response his son asked one more question “What is a business centre?”

The father then remembered how he got the answers to his questions about Telsec when he was looking for an office space for lease Toronto two years prior – from the Telsec website.  So he sat his son down at the computer and fired up the Internet – to which his son quickly pointed out that the Internet at his dad’s office was much faster than the Internet at home. When he loaded the Telsec website, he went immediately to the FAQ (Frequently Asked Questions) section of the site to let his son read the questions and answers that other people had posted.

The funniest part (that he told one of our office-space coordinators the following Monday) was that he actually learned a few things that even he did not know before as he went through our FAQ’s page. It turns out that he did not know what a green-friendly building was and the our building here at One Yonge Street is green. He also learned from our virtual office page that we now offer VoIP telephone service – which would let him take his phone with him anywhere he traveled for business and still appear to be in his Toronto office space.