The Guild Inn and the injured coyote in ET Seton Park 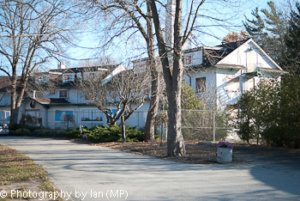 I had a meeting today with clients at my Toronto office space to discuss taking their wedding photos in the spring of 2011. They told me that they had already applied to the city for a permit to have their wedding and photos taken at the Guild Inn in Scarborough. They showed me some examples of photos they wanted to have done and looked at my wedding portfolio.

After our meeting, I decided to pick up my girlfriend (who was waiting for me at my place) and to take a field trip to really scout the place out. I had been there before and wanted to remember why so many like to have wedding photos done there.

The Guild Inn was an historic hotel in the “Guildwood” area of Scarborough. It was originally a 33 room, Arts and Crafts-style manor house built in 1914 for Colonel Harold Bickford. Bickford sold the manor and property in 1921 to the Catholic Church’s Foreign Mission Society. In1932 it was purchased by Rosa Breithaupt Hewetson heiress to the Hewetson Shoe Company, her second husband Herbert Spencer Clark and her resided in the mansion and fostered the arts, it then became The Guild of All Arts. 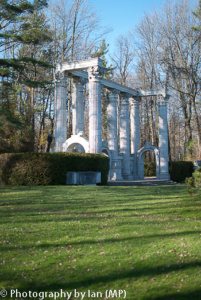 Greek Theatre at the Guild Inn

As more people were attracted to the artistic community on the bluffs, the Clarks made additions to the Guild in 1941 and 1942. During WWII they leased the property to the Canadian Government to be a base for the Women’s Royal Naval Service.

The house was returned to the Clarks after the war, The Clarks then restored it to its pre-war functions. They were forced to sell off 400 acres of the estate to developers, due to rising property taxes. Spencer Clark oversaw the planning of the area that would become Guildwood Village. With the remaining 90 acres, the Clarks continued collecting and adding to their array of architectural remnants.

Some of the remnants are remains of several banks, the very private Granite Club, the old art-deco Toronto Star Tower that once stood at King and Bay (not to be confused with the current Toronto Star Building), the belfry of a 19th century school, a mantelpiece from the home of Sir Frederick Banting and even the remnants of the former Temple Building, Toronto’s first skyscraper.

Then there is my favourite piece at the Guild, the Greek Theatre. This is the largest single peice on display and was created from the remains of the Bank of Toronto building that was torn down in 1968 to make space for the TD centre. 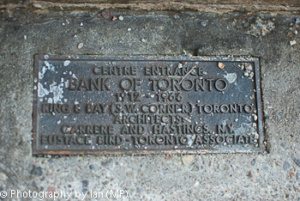 In the late 1970’s the Toronto and Region Conservation Authority purchased the Guild Inn and continued its operation as a hotel. In 1993, the property was handed over to the Municipality of Metropolitan Toronto (now under the City of Toronto) due to the fact that the buildings were in poor condition and the conservation authority could no longer maintain the property. 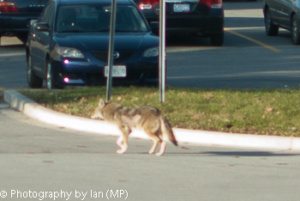 After wandering the grounds and taking a number of photos of the structures, various remnant pieces and my girlfriend, we decided to go to ET Seton Park in East York and take some more photos. As we were walking along the bicycle path, we noticed a few cyclists were stopped and staring at something near the rear parking lot of the Ontario Science Centre. It was an injured coyote. We kept an eye on it and followed it into the parking lot of the Science Centre, while we called animal control, who in turn told us that they could not help the poor animal as they were too hard to catch. As we were leaving the park and warning others of the coyote, one woman on a bike told us she had just seen a deer up near Sunnybrook Park. It is amazing how common wildlife sightings are becoming within city parks.