Telsec Toronto Office Space is Open on US Thanksgiving 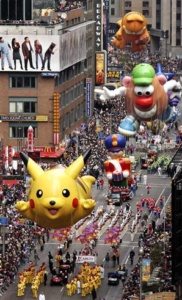 Many of Telsec’s clients are US based companies utilizing Telsec as there base of operations in Canada. When asked how they will be spending Thanksgiving, the American citizens who work in Toronto at their Toronto office space, had a variety of answers.

One office space Toronto client who hails from New York City told me that they have an early morning meeting in their Toronto office space, but did not want to miss the Macy’s Thanksgiving Parade. Their plan is to take a mid morning flight on Porter Air out of the Toronto Island Airport to New York, spend the day with some family watching the parade, then taking a late afternoon flight back to Toronto to attend an another evening meeting. Having an airport only minutes away from their downtown office that has frequent flights to NYC is one of the reasons they chose Telsec.

Another Canadian office space Toronto client, has booked the seminar training room for lunch time. They have invited their staff and some American clients who are working in Toronto for a Thanksgiving day lunch. The very helpful and skilled catering staff from the fourth floor cafeteria will be preparing the turkey and all the fixings at a reasonable charge.

Even some other clients who have no ties to the US Thanksgiving, have booked one of the boardrooms and invited other clients to come and watch the Macy’s Thanksgiving day parade on a large HD Television screen.