Technology and Innovation are Good for Small Business: Video Conferencing 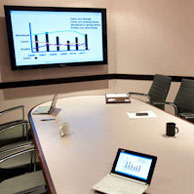 Impress you clients with a high-tech professional meeting room in an office business centre.

This article is about how small businesses can benefit from the technology and innovations that are currently in the marketplace.

For many years teleconferencing was expensive and the quantity was not good enough for what some users needed. Often it is was better to go to an office business centre to hold your teleconference, because the technology that could be found in one of these facilities was often far more advanced than what most small businesses would have available to them in their office or home office. Even if a businesses had the right set-up at one end, that did not guarantee that the set-up at the other end was as professional.

The 1990’s brought about the advancement and development of video conferencing systems due to technical advances in Internet Protocol (IP). Also, more efficient video compression technologies were developed that would permit desktop or PC-based videoconferencing.

Through free services and software, such as MSN Messenger, Yahoo Messenger and NetMeeting, video conferencing was brought to the entire public. While the video quality was was often choppy or even poor at best, people used it because of the price (FREE). As it became more adopted by the consumer market, it was only a matter of years before video conferencing made its way to business computers.

It was not until the 2000’s when video conferencing evolved towards PC-based online meetings. Broadband or high-speed Internet access became more widely available at such a low price point that more homes and business were able to afford the technology. The price of web cameras and the cost of PCs was minimal.

It was not until 2005 that through VoIP, video conferencing could be done over secure connections and multi-point video without having to use several telephone lines at $30 to $100 per line per hour.

Then in 2012, Google introduced Google Hangouts. This service was part of the Google + service and popular among those who are internet enthusiasts. Then came February 2014 and Google and Asus released a new device for business video conferences called Chromebox For Meetings. As you can imagine, businesses flocked to a device that only cost $999, which is hugely less expense than many business-class video conference systems that can run into thousands of dollars.