This blog was inspired by some interesting conversations that happened at the Telsec office space Toronto Christmas party for office for rent Toronto tenants. This year, like previous years, the food and drinks were set up in the boardroom that is just off of the reception area, but most people were standing around the reception area talking and being offered finger foods as the waiter walked through the crowd. 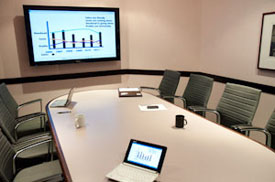 Because this was a Christmas party for all office space for lease Toronto tenants, one of the topics of conversation between tenants was how big and diverse the crowd was and maybe Telsec should move next year’s party to one of the larger Toronto meeting rooms or even the seminar training room. Another topic of conversation that was also party-related was where and what type of seasonal party were the office space tenants having for their own staff or clients? A few people said that they where having their seasonal party for office staff at office space Toronto in one of the meeting rooms. Some even said they planned a lunch gathering with catering by Cafe on 4 (the cafe on the forth floor of One Yonge Street). Then others said they planned to take their staff out for dinner at a local restaurant like The Miller on Bay Street or Toulà – the 38th-floor Italian restaurant atop the Westin Harbour Castle Hotel.

The other non-seasonal conversations that were going on at the Telsec seasonal party for office tenants at office space Toronto included some networking between office tenants who had not met before. This was especially true of some of the 19th-floor tenants who had not had a chance to previously interact with those tenants on the 18th floor. This is mainly because, with the exception of the receptionist, both floors offer the same amenities and there is no need for people on the 19th floor to travel down to the 18th or those on the 18th floor to go upstairs. The exception that one office for rent Toronto tenant on the 18th floor mentioned was that sometimes, when their floor kitchen is out of the Hazelnut flavored coffee, they will go up to the 19th-floor kitchen to get themselves their favorite coffee.