Putting on the Gloves in Toronto Office Space 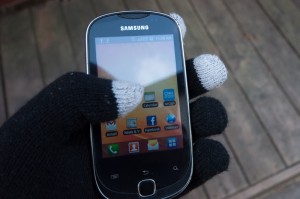 Conductive Gloves allow you to interact effectively with device touchscreens regardless of the existing temperature.

The old expression “Taking the Gloves Off” has often been used in business when it is time to knuckle down and “get down to business.” In these tough economic times many small businesses are having to take the gloves off and fight to survive. Other entrepreneurs and small business owners are putting the gloves on at their Toronto offices to better interact with technology.

Today at our office space Toronto, this blogger noticed a woman who had an office for rent Toronto at Telsec wearing gloves in the 18th-floor kitchen. I was perplexed at what I was seeing because it was not that cold anywhere on the floor. A closer look showed that the gloves had silver-looking tips on the first two digits and on the thumb. It turns out that the woman was not wearing the gloves for warmth, but because the conductive silver thread on the tips of the glove made it easier to use the touchscreen on her smartphone, her tablet and her PC.

It seems that the woman with the special gloves was not the only person putting on the gloves in Toronto office space. A number of office space Toronto tenants have purchased these types of gloves or have bought special discs that can be attached to any pair of gloves, while others have gone and sewn some polyester/silver thread onto the tips of their favourite pair of gloves.

The popularity of these types of gloves springs mainly from the need to unlock or interact with most touchscreen phones in extreme temperatures. When it is too cold or too hot for the touchscreen to detect the temperature change of the finger touching it, the conductive thread allows the user to interact with the device properly during whatever temperature conditions they are experiencing.

Oh by the way, the woman who was seen putting on the gloves in her Toronto office space says that because she has gotten so used to wearing the gloves to interact with her touchscreen devices, she rarely takes them off. And she rarely has to clean the fingerprint smudges off her screens either!

So the next time you see someone wearing gloves in your downtown office space, don’t wonder if the person is cold or odd. Consider that they are probably wearing conductive gloves to interact with their touchscreen or simply trying to keep finger smudges off their devices.