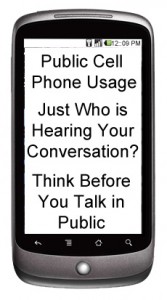 Have you ever been on public transit or in a confined public place and could overhear the intimate details of a loud cellphone talker? Most of those overheard conversations are about where a person is heading or what some of their private plans are. So, they are simply annoying to hear – not to mention being downright rude! But what if what you were hearing was private information about a company, its clients, its employees or financial information about the company or one of its clients? It happens more frequently than you might think. People tend to forget that sometimes they are prone to talk louder on their cellphone (especially if they are wearing ear buds).

Most people will tell you that they cannot stand it when people talk too loudly on their phone in public. According to Microsoft’s Lumia Conversations, 21% of respondents to a poll they conducted on cellphone etiquette found that people who “seem to yell a conversation rather than simply speak it” was their biggest annoyance. Obviously, the rest of the people who replied to the survey have not been on a public transit vehicle with that person or in similar situations.

It is not uncommon for someone who has shared office space at an office business centre or in a large office tower to take a business call on their cellphone while on the elevator or walking down the hall. The problem is they forget the volume of their voice and who can overhear their conversation. The best thing they should do (but often don’t) is to keep the call short and ask the other party to let them call them back when they are somewhere more private.

Consider how you would feel if you were that other person on the other end of the call, not knowing who is overhearing your business dealings. It is just as important for you as for them to ensure that they are not talking to you about business when you are in a public location.

But another thing to consider is a question posed by Psychology Today” “In other situations, however, public cellphone talkers may enjoy being in the conversational limelight. They want to look busy, important and in charge.” But if they happen to be talking to you or about your business, their narcissism could be harmful to you or your business.

Conducting business on the go can be done in a private vehicle, but should never be done while using public transportation – or anywhere their is a chance that your private business can be overheard. It may be tempting to take a call while in a public place or to take a call from another party who is in a public place, but their is a reason they call it a private conversation – especially when it is about business.