Lest We Forget on This Remembrance Day 2013 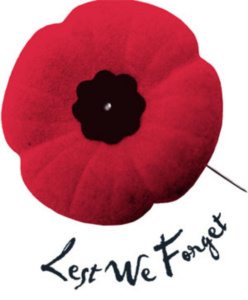 Lest we forget all of those who laid down their lives for Canada!

Now you ask why was the poppy chosen as the symbol of remembrance for all of Canada’s war dead? It is because the poppy became an international symbol for those who died in World War 1.

It was a poet who first made the connection between the poppy and battlefield deaths. Prior to the First World War, very few poppies grew in Flanders fields. During the bombardments of that war the chalk-like soil became rich in lime from rubble, allowing those ‘popaver rhoeas’ to thrive.

When the great war ended the lime was absorbed, and the poppy began to disappear again. I was not until Lieut-Col. John McCrae, a Canadian doctor who wrote the poem IN FLANDERS FIELDS, made the connection that the scarlet-coloured poppy quickly became the symbol for soldiers who died in battle.

It was not until November of 1921 that the first poppies were officially distributed in Canada as symbol of remembrance. But now each November, poppies blossom on the lapels and collars of most of Canada’s population. The poppy has stood as a symbol of remembrance and our visual pledge to never forget all those Canadians who have fallen serving their country in military operations around the world and at home.

Because of the writing of McCrae and the work of the Royal Canadian Legion, the poppy has also be become a symbol that stands internationally as a “symbol of collective reminiscence” as other countries have also adopted its image to honour those who have made the ultimate sacrifice. It is with thanks to the millions of Canadians who wear the flowers each November, that the little red plant has never died. And neither have our memories for hundreds of thousands of fellow Canadians who died in battle serving this great land.

IN FLANDERS FIELDS
In Flanders Fields the poppies blow
Between the crosses, row on row,
That mark our place; and in the sky
The larks, still bravely singing, fly
Scarce heard amid the guns below.
We are the Dead. Short days ago
We lived, felt dawn, saw sunset glow,
Loved and were loved, and now we lie
In Flanders Fields.
Take up our quarrel with the foe:
To you from failing hands we throw
The torch; be yours to hold it high.
If ye break faith with us who die
We shall not sleep, though poppies grow
In Flanders Fields.

As part of our Remembrance Day observations, our telephones will not be answered between 11 am and 11:02 am for moments of respect. We encourage you to take a moment at 11 am on the 11th day of the 11th month to pay your respects to those Canadians who have laid down their lives to secure our freedoms.