The missing float was that of those who were proud to have a downtown Toronto office space, but there is always next year.

Meanwhile a few hours before the parade, Her Majesty Queen Elizabeth the Second was on a walk further down Church Street, at a morning service and dedication at St James Cathedral at Church and King Streets.

Back up Church Street, there were plenty of other queens for the pride parade, including one who chose to wear a balmomaral kilt (the official kilt tarten of the royal family) .

I did not make it out to Woodbine Racetrack for the running of the Queen’s Plate, but I was able to find a pub that had the race along with the pomp and circumstance of the Queen’s presents at the race on TV. 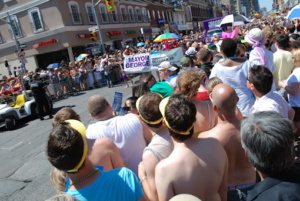 The parade on Yonge Street did not include any references to the Queen on her Royal Visit, it did include support groups and floats from the various people who were running for Mayor of Toronto.