Saying Happy 143rd Birthday Canada makes more sense than saying Happy 27th Canada Day. What a lot of people may not know or may not remember is that the first time July 1st was called “Canada Day” was 1983.

Previously July first was known as “Dominion Day”, but an Act of Parliament in October of 1982, changed the name so to make the name sound less colonial and because in 1992 Canada had its own constitution that replaced the British North American Act (BNA). Some (like my father) refused to accept this name change and continued to call it “Dominion Day” because they believed that dominion referred to to the fact that Canada had dominion from sea to sea.  I still remember asking when I was about 10, why Dominion Stores had day named after it .

Regardless of what it had been called or what it is now called, July 1st is a day for Canadians to celebrate Confederation through the BNA of 1867, that made Canada a Kingdom of its own. Being born on the Centennial year of 1967, it was alway easy for me to remember how old Canada was, I just had to add 100 to my age. The year I was born, the government sent out special scrolls for children born in that year.  I wonder if for its Sesquicentennial, the government will send out a special tax rebates to those born in Canada on its Centennial. Ok, wishful thinking.

Back to this Canada Day. In our nation’s capital, Canada Day was off to a more pomp and circumstance beginning, because Her Royal Majesty The Queen and Prince Philip arrived on Parliament Hill in a horse-drawn landau, complete with a mounted RCMP escort. 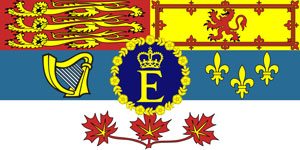 Instead of the Canadian flag flying above the Peace Tower of Parliament Hill, the Queen’s personal Canadian flag (The Royal Standard) will be flying.

I believe that shortly after the Queen leaves Parliament Hill, her flag will then be taken down and replace with the Canadian flag for the remainder of the Canada Day celebrations.

As I sit here working in my Toronto downtown office space, I notice that I am only one of a few people working on this national holiday. Some of the others who are working in their Toronto office space are much like myself and are working with American clients who do not have a holiday today. This is not the case for an acquaintance of mine, his office space Toronto is closed today, but he still needs to work. Working from home was not an option, as his neighbors were having a large and noisy Canada Day party. She had to rent a hotel room with WIFI internet access, so she could meet a deadline of July 2nd. She did tell me that she is now rethinking her current office situation, but is stuck in a lease that does not come up until the end of this year. I reminded her that I have a great office space location without a long term lease commitment, and that I have 24 hour access seven days a week.  Her only rebuttal was “why did you not tell me about this sooner”.