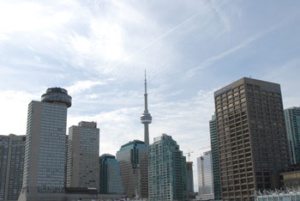 This past weekend I went camping. While most of my fellow campers were Canadian, there was a number of Americans who were camping with us. One of the American I met was a custom office furniture manufacturer from Ohio.

We had a chance to talk for a while and he mentioned that he has been doing business in Canada for the past 20 years without a Canadian Office. He told me that he now recognizes that he needs to make his Canadian presence know, especially if he intends to increase his business on this side of the border. He was planning to open an office back in November, but the global economic downturn put those plans on hold.

I asked him if he had ever considered opening a Canadian virtual office in Toronto. He said he had considered a post office box address in Canada, but was not sure that would be enough. So I told him about Telsec’s Toronto virtual office space.

I told him that he could have a Toronto office address at a prestigious address (One Yonge Street) , as well as a Toronto Telephone number that could be re-directed to his Ohio office, for far less than it would cost him for a Toronto office space for rent.

The fact that he could choose the virtual office package that would best suit his needs and would give him a good Canadian presence got his attention. It was more interesting to him that, when he did visit clients in Toronto, he could even rent a Toronto daily office space at the same address as his virtual office.

A Telsec Toronto virtual office is ideal not only for companies in the United States who want to have a Canadian office in Toronto, but also Canadian companies from other provinces looking to have an office in Ontario. Companies from Europe, Eastern Europe, Asia, and even Africa look at Toronto as an ideal Canadian office location. Being Toronto’s premier office rental space and virtual office location, Telsec is the place that many non-Canadian companies look first to set up an office.

As has been mentioned in previous blogs, the greatest part of opening a Canadian virtual office space in Toronto is the flexibility. When you are ready to upgrade to a physical Toronto office space, you can easily move into your office space Toronto, without changing your address or phone number.