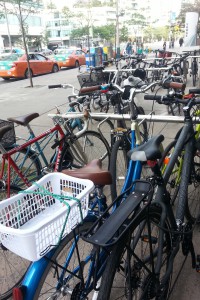 Many places around the world have seen large numbers of people commuting to work via their bicycles. But now this is becoming more and more popular in North American cities. Pleasure pathways are fast becoming the next commuter congestion areas. The city of Toronto has over 286 “bikeway trails” and there is a call for more trails and more dedicated bicycle lanes.

Even websites like Business Insider have published articles back in 2012 called “13 Reasons You Should Bike To Work“. One of the reasons (besides health and fitness gains) they site is the fact that the cost of owning, maintaining and insuring a vehicle keeps rising. While they also mention missing the morning traffic congestion, they did not take into account the new problem of bicycle congestion on the roads and cycling paths.

The City of Toronto is developing a new 10-year plan for growing, connecting and renewing Toronto’s cycling network. The City has undertaken analysis to identify the proposed routes on the draft map. Learn more about the safety, coverage, connectivity and cycling analysis in the “Studying Toronto” section of the project website.

A visit to many downtown office locations will show you that more and more people are not just riding their bikes for pleasure, they are using them to commute. The problem is that many building and city bike racks are filled up early in the day and it is becoming harder to find bicycle parking that is in a safe location and close to the office. When office buildings or the city install new bike racks, they are quickly filled with more bicycles that are being utilized as a commuting option.

Bicycle sharing services like Bixi and BicycleShareToronto.com have also seen an increase in ridership and usage, as well as a demand for more bicycles and stations to pick up and drop off these rental bicycles. Outside of our office space Toronto building, there is one of these stations only a few hundred yards from the main doors of the building.

One of the other potential problems of riding your bicycle to work is staying dry and not sweating up a storm on a hot summer day. The last thing you want to do is to show up at the office drenched in sweat. Enter the folks at LifeHacker.com, who compiled an article to help you with some advice “How Can I Ride My Bike to Work Without Getting Sweaty?” The advice primarily came from the cycling enthusiasts at Stack Exchange. Some of their advice includes taking your dress shirt and changing into it when you get to the office. They also talk about choosing a slower pace, so that you are not exerting too much energy.

One of our office for rent clients rides his bicycle to the office almost year round. He keeps his suits at the office and travels in casual clothes to and from the office. A great amenity in our building is there is a dry cleaner on the main floor, so he drops one suit off one day and picks up the other suit that he left there a few days before. Another thing he does is to keep a good stock of baby wipes in his office to freshen up on hot, humid days.

The transition from non-bike-commuter, to a sometimes-bike-commuter, and eventually to full-time-bike-commuter, is not an overnight process. It’s a matter of learning your own limitations and preparing for the weather and other challenges that bicycle commuting may throw at you. You may find it hard to begin with, and it can be hard at other times. But over time, you find little solutions to each of the problems – and before you know it, you will be bicycle commuting full-time.