I woke up this morning to head into my Toronto office space at Telsec.  I didn’t realize it had snowed until I was walking towards the door and heard a crash. I looked out the front window and noticed a nice covering of snow on the ground and an SUV plowed into a parked car. Oh, the signs of a first snowfall.

There are a few reasons why I am happy that my Toronto office space is at Telsec. The first reason is the location. Because it’s just south of Lake Shore Blvd., it’s really easy to get to and being able to avoid bad winter drivers is always a good thing. I can take Lake Shore Blvd. or avoid most of it by taking back roads like Commissioners and Queen Quay, with only a short drive between the two on Lake Shore.

The second reason I am happy my Toronto office space is at Telsec, is that I have an underground parking space. It’s nice not to have to step out in the cold and clear the snow off your car when you’ve been in a nice warm office all day. While it’s a bit more expensive than the outdoor lot behind the Toronto Star Building, it is a lot less expensive than most downtown Toronto parking garages. 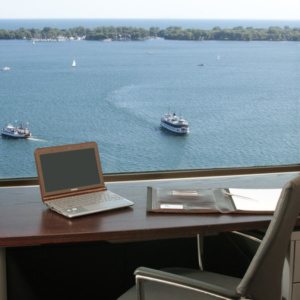 Do not get me wrong, it’s not that I don’t like snow  – it’s that I don’t like driving in it or having to shovel it. I actually enjoy watching it fall! The third reason I’m happy with my Toronto office space at Telsec is the unobstructed view of Toronto Harbor and Lake Ontario. In fact, most of the window offices in my downtown Toronto office space have a view of the lake (obviously not those offices that face north to the city).

The fourth reason that today in particular, I’m happy  my Toronto office space is at Telsec, is that I do not have to leave the building to go for lunch. The Toronto Star Building Cafeteria (or CafeOn4 as they now call it)  is located on the fourth floor and also has a view of the Toronto harbour. This is great because I really don’t like food courts that are in the dark basements of most Toronto executive office space towers. CafeOn4 has some great food at good prices and is open to all tenants of the building. That is why they are doing a name change. Too many people thought that because it was called the Toronto Star Cafeteria that it was only for Toronto Star employees.  (by the way, the fish & chips on Fridays is really excellent!)